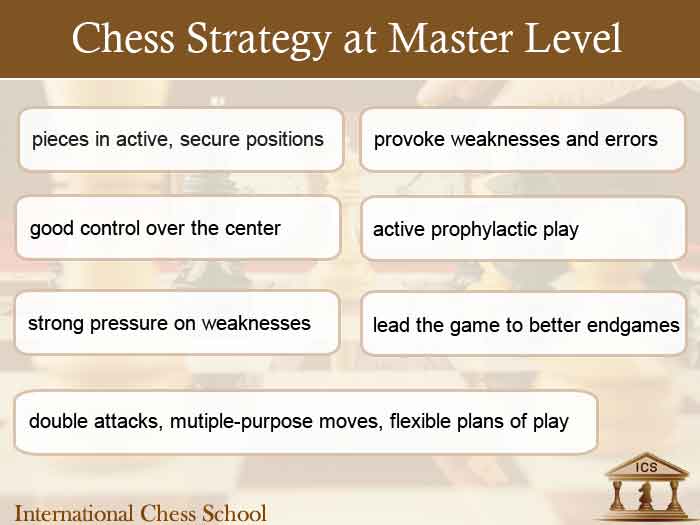 A grandmaster is first and foremost an expert in chess strategy! However, this is not the same thing as being an expert tactician. Actually, there are many masters and grandmasters who are not good tacticians at all. In spite of this, they win game after game because of their brilliant positional style. They 'just' use their strategic awareness to 'suffocate' their opponents and avoid complications altogether. As a matter of fact, if there is no natural talent for tactics, this isn't too much of a problem. But a good strategist is always a strong player.

So, there is really good news if you want to become a strong chess player. That is, you can improve your strategy from beginner to master level. It can be done in one to five years depending on your starting level and the time that you have for study. Then, it is of first importance to follow a structured, long-term training program. This should be based on both strategy lessons and positional exercises.

The following article lays out some ideas and tips about chess strategy for beginners. But, if you want to become a strong player, we have something better for you! This is our school's core course, the Grandmaster Package. It comes with advanced lessons, exercises and annotated games covering strategy, the middlegame, calculation methods, and complex endgames. In addition, you'll have free and unlimited teacher support and guidance.

A chess grandmaster is a complete player who has a good technique in all the phases of the game. However, what makes a big difference is the set of powerful strategies that they use. In the following article, we present 7 'deadly' chess strategies of a grandmaster.

Chess Strategy #1
All the pieces in their best positions

One of the most important chess strategies that grandmasters use is to place each of their pieces in their best possible positions. They are grandmasters because they do that very fast. On the other hand, their weaker opponents do not always know what is the best place for each of their own pieces.

Although the two armies are of the same quantitative value, the pieces of the master seem to be stronger. Why's that? Because they know to place them in safer outposts, with more activity, completing more tasks and with better cooperation with the other pieces. After a few moves, the pieces of the grandmaster seem to cover the whole board and control all the key squares.

From the opening, the master will develop all his pieces fast and in the best possible positions. In the middlegame, the pieces will collaborate in a harmonious way to create an active plan of play. At the same time, the grandmaster's pieces hamper the opponent's piece-coordination.

The chess master will improve the position of their pieces to the best strategic position before the final strike. If you want to see great examples, study the games of Anatoly Karpov. You will see that he prepares the final strike with very meticulous precision. He brings all his resources to the right places. This way, an opponent will have almost no chance.

Remember!
A good chess strategy is to imagine the best possible position for each of your pieces and then to try to bring them there.

From the center, the pieces go faster and easier to any place on the board, and so the chess master will always try to control this area.

In the opening and middlegame, the master will try to control at least 2 out of 4 squares in the center, and as many squares as possible in the large center (the c3-c6-f6-f3 square). In the endgame, the king is usually better close to the center, where he becomes as strong as a minor piece.

Remember!
A good control over the center is a must if you want your plans and strategies to work.

Chess Strategy #3
Pressure on the weaknesses

As a sore point brings troubles to a whole body, a positional weakness is a breach and an object of attack for the opponent.

When there is a weakness, the grandmaster will immediately start to press there with all his forces until his opponent cannot hold the position anymore. Indeed, the grandmaster attacks you where you are weakest – not strongest – and hurts you there the most.

The continuous pressure on a weakness also brings the initiative. The player with the initiative can carry on with his tasks easier as he is in attack mode while his opponent has a passive role and just defends.

Remember!
A guaranteed good chess strategy is to discover the weaknesses in your opponent's camp and attack right there.

But what if there are no weaknesses? In that case, the grandmaster will do anything to provoke them!

To create weaknesses in the opponent's camp, the grandmaster plays fine chess strategy, using all his creativity and tricky techniques. The strategy of weakening squares, pawns, or the opposing king's position is a real grandmaster's technique. We teach the complete strategy of provoking weaknesses in our principal chess course, the Grandmaster Package.

You'll often hear among chess players something like this: "The position was equal but my opponent won by luck. If I had not played that wrong move, the game was a draw." Actually, the mistakes are provoked by a cunning technique of play or, simply, by a better management of the nervous tension.

A treacherous strategy of the grandmasters is to use even their opponent's fear! The grandmaster will place his pieces in positions that look threatening, but which actually lack any real threat. Their opponent will think that the grandmaster must have something and will play unnecessary moves that, in fact, only weaken their own position.

It is a war on the chess board and nervous tension plays an important role. Nerves of steel have assured Magnus Carlsen supremacy in the chess world.

Remember!
Use fine chess strategy to provoke weaknesses in your opponent's camp. If that is not enough, make use of any strategic trick to outsmart your opponent.

Also called prophylaxis, this strategy is a real art.

All world champions were amazing at 'suffocating' their opponents. Look at the games of Capablanca, Botvinnik, Petrosian or Karpov and you will see many formidable examples of 'simple' play. Their games may look simple and logical, but what is behind that simplicity? It is advanced prophylactic play. Their opponents had not even touched the ball at all. The world champions knew how to restrict their opponents' counter-play to the minimum and then they were free to execute their plans with that characteristic 'simplicity'.

Remember!
Do not let your opponent make his/her own plans. Obstruct their active ideas as early as possible and then you'll be free to execute your plans!

The most basic example in chess is the rule of the square in endgames, where the king moving diagonally approaches two points simultaneously.

The grandmaster knows how to make plans of play and find moves with multiple purposes. Then, while you try to defend against his strongest threat, you'll weaken your defense on the other part of the board.

Alexander Alekhine, former world chess champion, was well known for his skilful ability to play on both flanks of the board. Study his strategy and you'll gain a lot.

This strategy is also used together with the fourth one – creating two weaknesses that are afterwards attacked at once (the double attack).

Remember!
A very powerful chess strategy is to choose moves and plans with multiple purposes or threats. So, opt for a flexible strategy whenever possible.

Chess Strategy #7
Lead the game to a technically won endgame

Many games at master level are decided by the strategy of creating a better endgame.

When the chess master spots a long-term weakness in the opponent's camp, like a bad pawn structure, he will be happy to lead the game to the endgame stage. In the endgame, the weaknesses become more critical as there are fewer possibilities for counter-play and the master can win 'effortlessly'. Of course, winning complex endgames requires an advanced technique of play.

We study this strategy and technique of play in Months 10 to 13 of the Grandmaster Package.

Remember!
In the endgame, the fight is less complicated and the weaknesses can be exploited easier.

It's your turn!
The complete chess strategy that makes a chess player a master is taught in great detail in our core chess course, the Grandmaster Package ».

Article last updated on March 4, 2020 by the ICS webmaster.

"Speaking as someone who has over 500 chess books (I am somewhat of a collector) I have found this program to be HIGHLY instructive and easy to assimilate. I finally feel like I have a systematic approach that can help me stay on track and meet my goals." - Roland W.

"I wanted to say how impressed I am with the quality of the material provided. I have an ELO of around 2150 and have read hundreds of chess books. Rarely, if ever, have I encountered such a clear explanation." - John M

"I just finished a tournament and this was the most consistent I have ever played. I have been playing in tournaments for nearly 30 years and for the first time I feel confident, and that I can play with most anyone. This course provided with true understanding. You have made it so clear... I feel Master is definitely not out of my reach." - Joseph C., USA, chess player and coach

"This isn’t just a “pot boiler” like so many courses and books, but a serious, well thought out course of instruction. ...mastering the material coupled with time, play, and perseverance will surely suffice to create a player of master strength. Well done!" - Dr. Edward Baker, USA

"As more and more pieces of the puzzle start to fall in place, I’m playing with a lot more confidence, I have won almost all of my latest games and will be gaining at this moment already approx. 130 ELO-rating points in 3 months." - Bart C.

"Thank you for such a great service, I have taken lessons from a GM before and this is much more affordable and just as good. My rating is 2151 now and I can't thank you enough for the great information you have to offer." - Cody W.

"Your program is good. I have dozens of books, more than my local library, but they r not too precise to the point like your lessons." - Charlie F., Australia

"Again, I find your instruction to be the best that I've seen, and I've been playing chess for 35 years." - Joseph C., USA

"I must say that your lessons are very interesting and am looking really forward to study hard at my chess. As a 2080 elo FIDE rated player, your method and approach look like a revolution to me and I realise now how bad I was working on my chess by my own. Thanks very much for your good work.z" Ronald A.

"I would like to thank you and the staff for providing a high level of instruction at a low price. I won my first A-section tournament 1600-1900 section, with a score of 3 wins and one draw thanks to the chess school." - William M.

"...200 point increase (after 3 months) in my chess rating (and a larger increase in my online rating). Thanks for making a wonderful product. It's rare to find lessons so instructive....this is some of the best money I've ever spent. I've improved more in the last year than I have in the five years prior." - Evan Buntrock, USA